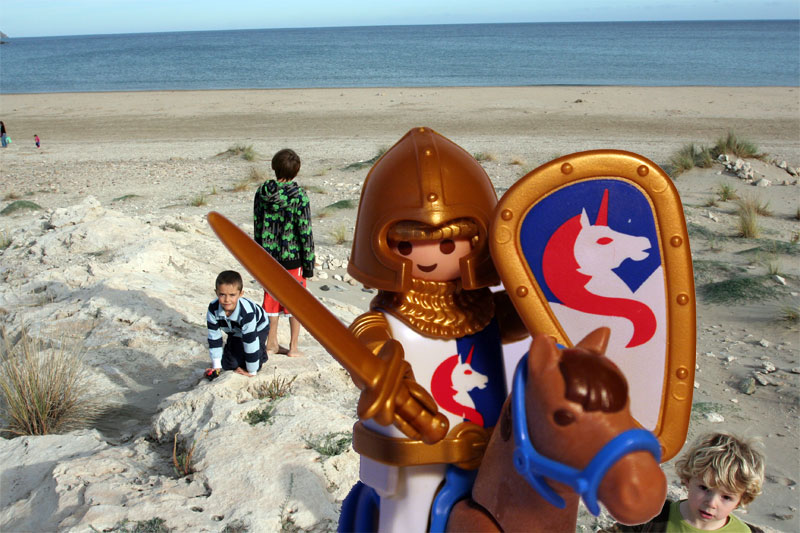 If you come to the park, do not forget to bring some of your playmobiles, because the adventure is served: pirate landings, defense of castles, spears thrown on the beaches? he he. We already know that they are reeds brought by the sea, but they are the best spears, with your imagination and nature the entertainment is safe. Cabo de Gata is still virgin, many of its beaches and coves are safe for boys and girls, where the water does not cover until very deep, where a rod, a stick or a shell is the best toy, where the sun and the air they awaken the imagination.

The Cabo de Gata Natural Park can be visited with children and enjoy a good vacation, walks through the countryside, beaches, sports, visits and excursions. 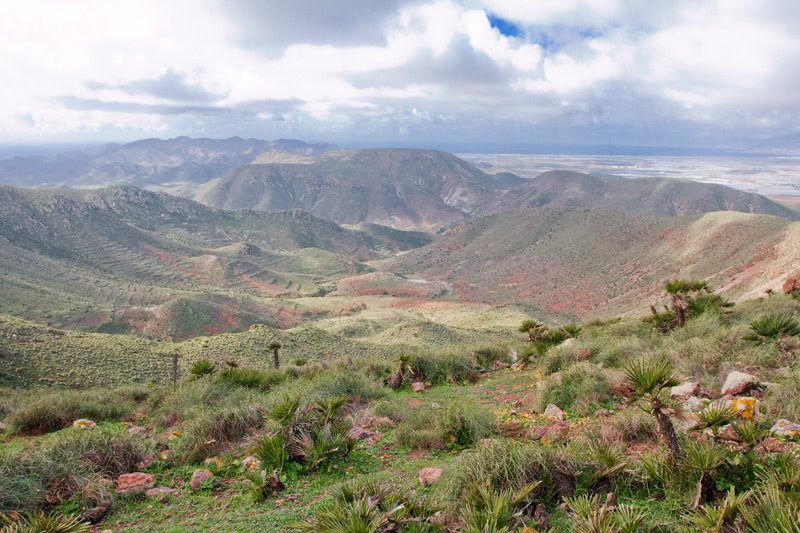 LOW CLASPS. Small town whose houses are painted in an intense white that stands out greatly on the landscape of the area. The town is located in the lower part of the hillside of Cerro de La Rellana de la Majada Redonda.

The poster describes how the path we are going to travel is like and explains how the Caldera was formed and what it is like:

«This path reaches the Caldera de Majada Redonda through the boulevard that begins in the caldera itself.
It is the crater of a volcano, whose walls collapsed as a result of the enormous pressure caused by the intense outcrop of the magma. In the center of the caldera a rocky promontory emerges from where you can see its circular structure. "

The beginning of the path runs along the zigzagging bed of the boulevard. The path is wide and the floor is made of beach sand, which forces us to make a somewhat greater muscular effort.
Throughout the entire route you can see the characteristic vegetation of the area, highlighting prickly pears, pitas and palm hearts, in addition to a great variety of native plants: esparto, albaida, horehound etc.
There are also numerous volcanic rocks along the way, which continues to zigzag, adapting to the orography of the terrain between the hills.

You reach the ruins of the Cortijo de los Berengueles, which in principle is not seen, but we can distinguish the remains of a waterhole that we observe at a bend in the road.

A little later we will find a crossroad which will lead to the CALDERA DE LA MAJADA REDONDA.
You must be attentive to the crossing so as not to get confused. The path to the left leads us to the town of Los Albaricoques. We will take the one on the right which is the one that leads to the caldera.

We leave the sandy road to take a narrow path to the right at this point. We must be careful with the floor, as there are loose stones and it is easy to slip.

At a bend in this path we suddenly find something unusual: a car!
How do I get there? Who knows?. To alleviate the visual impact, hikers usually place a stone on the car, until they are able to hide it.

We continue on more comfortable terrain and we arrive at the indicator panel that explains how a VOLCANIC BOILER:

«In the period between 15 and 16 million years, the Cabo de Gata Volcanic Complex was formed, which constitutes the emerged part of an extensive submerged magnetic area that extends through the Albarán Sea area.
The Volcanic Complex that we find in the Cabo de Gata-Nijar Natural Park is an authentic natural museum of enormous educational and scientific interest, since here we can observe very diverse and interesting geological phonations on the ground, such as the volcanic calderas.
What is a volcanic caldera and how is it formed? It is a large crater formed by the collapse of the ground in the eruption of a volcano. This fact occurs when volcanic emissions are very large and explosive, throwing tens of tons of magma to the earth's surface. When such a large volume of magma is extracted from a Magmatic Chamber, the ground collapses forming a huge depression that is what we call the Caldera. Sometimes, after the formation of a caldera, the magmatic carama receives new contributions from deeper areas and the interior of the caldera can rise again, in a phenomenon called Resurgence.
If you observe, the huge walls that surround where we are, are totally united, forming a perfect crater, and we are inside one of these impressive formations: the Caldera de Majada Redonda.
It can be seen that there are remains of forage species plantations and some fruit crops. This is because, in an area as arid as Cabo de Gata, the population has sharpened its ingenuity when it comes to obtaining water, and has used this huge volcanic cone as a funnel that collects rainwater and concentrates it in its lowest part, where we find the crops. "

After reading the information we see that we are in the center of the crater, but you have to look very well to see it and distinguish it. To do this, we climb a few meters and with the help of our guide and our imagination we manage to see the crater and enjoy the landscape.

We return by the same path that we have come or by the different paths that are perfectly visible on the descent.